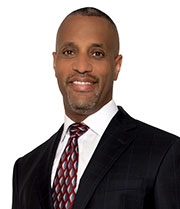 Mr. Jordan, founding Principal of the firm, is head of JIPL's Electrical and Software Practice Group. A native of Chesapeake, Virginia, Mr. Jordan majored in electrical engineering at Virginia Tech and worked as an electrical engineer for Canon Virginia, Inc., in Newport News, Virginia, after receiving his Bachelor's degree in 1994. During his time with Canon, Mr. Jordan designed and diagnosed electrical systems for laser printers and copiers, and taught in-house courses on laser printer electronics.

In 1996, he enrolled full-time in law school at the College of William and Mary. While a law student, Mr. Jordan worked as an intern for the NASA Langley Research Center office of Patent Counsel in Hampton, Virginia. During law school, he also became a registered patent agent and continued to work for NASA as a patent prosecution contractor.

Upon graduation, with honors, from law school, Mr. Jordan worked in Troy, Michigan as an associate with a well-known Michigan-based intellectual property law firm. He was engaged primarily in patent prosecution in the electrical, mechanical and software areas. He also conducted trademark infringement litigation work and filed multiple copyright registration applications for corporate clients.

Mr. Jordan then joined the Washington, DC office for a well-known New York City-based intellectual property firm, where his practice focused on the acquisition and enforcement of domestic and foreign patent rights in the electrical, wireless communications and software fields. Mr. Jordan participated in patent infringement litigations in U.S. District Courts and before the International Trade Commission. During his time at this law firm, he also managed the prosecution of multiple reexamination proceedings and prepared numerous non-infringement and invalidity opinions.

Mr. Jordan has also worked for Intel as a Senior Patent Attorney, where he interacted closely with business personnel, harvested invention disclosures, managed outside counsel in the preparation and prosecution of patent applications, and developed foreign filing strategies for the company's IP portfolio. Most recently, he was Counsel with the IP Litigation group of an Atlanta-based general practice law firm, where he conducted pre-filing due diligence studies and advised clients on the strength of their patent infringement positions. Mr. Jordan has also taught Patent Drafting as an Adjunct Professor at the University of Maryland Carey School of Law and is an officer for the IPO Software Related Inventions Committee.